About the Forest Lodge 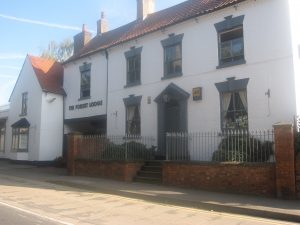 Situated in the heart of Sherwood Forest, home of the legendary Robin Hood, The Forest Lodge is an 18th century coaching inn owned and run by the Thompson family.

Additionally, The Forest Lodge is accredited to four star standard with the AA and is rated under the National Accessible Scheme and has appeared in the Good Beer Guide since 2007.

The building has been lovingly restored and refurbished to provide the visitor with a warm and homely base from which to explore the unique attractions of this fascinating and historic building.

The Forest Lodge sits just five minutes’ walk from the famous Sherwood Forest, legendary stalking ground of the semi-mythical folk hero Robin Hood, first made popular in medieval ballads. Thanks to this connection with Robin, Sherwood has become one of the most visited woods in the United Kingdom. It actually means ‘shire wood’ and was once the largest of about 90 royal forests, a popular hunting ground with nearly all monarchs from Henry I to Richard III. Later on, from the 16th century onwards, many trees were felled to make way for farming and to provide wood for the construction of ships. The royal land was increasingly sold to wealthy families to build mansions with vast landscaped parks. It was for this reason that the area came to be known as ‘the Dukeries.’

The village of Edwinstowe itself was named after Edwin, King of Northumbria, and it literally means “the holy place of Edwin.” It is believed that Edwin died whilst fighting a battle against King Penda of Mercia just a few miles from here in 633 A.D. In his honour, a church was built on the site of the present day St. Mary’s church where, according to legend, Robin Hood married Maid Marion. The church can be seen from the windows of many of our rooms.

The Forest Lodge is ideally situated to visit a host of local attractions, some of which include:

For those of a more active disposition, there are plenty of sporting activities very nearby: